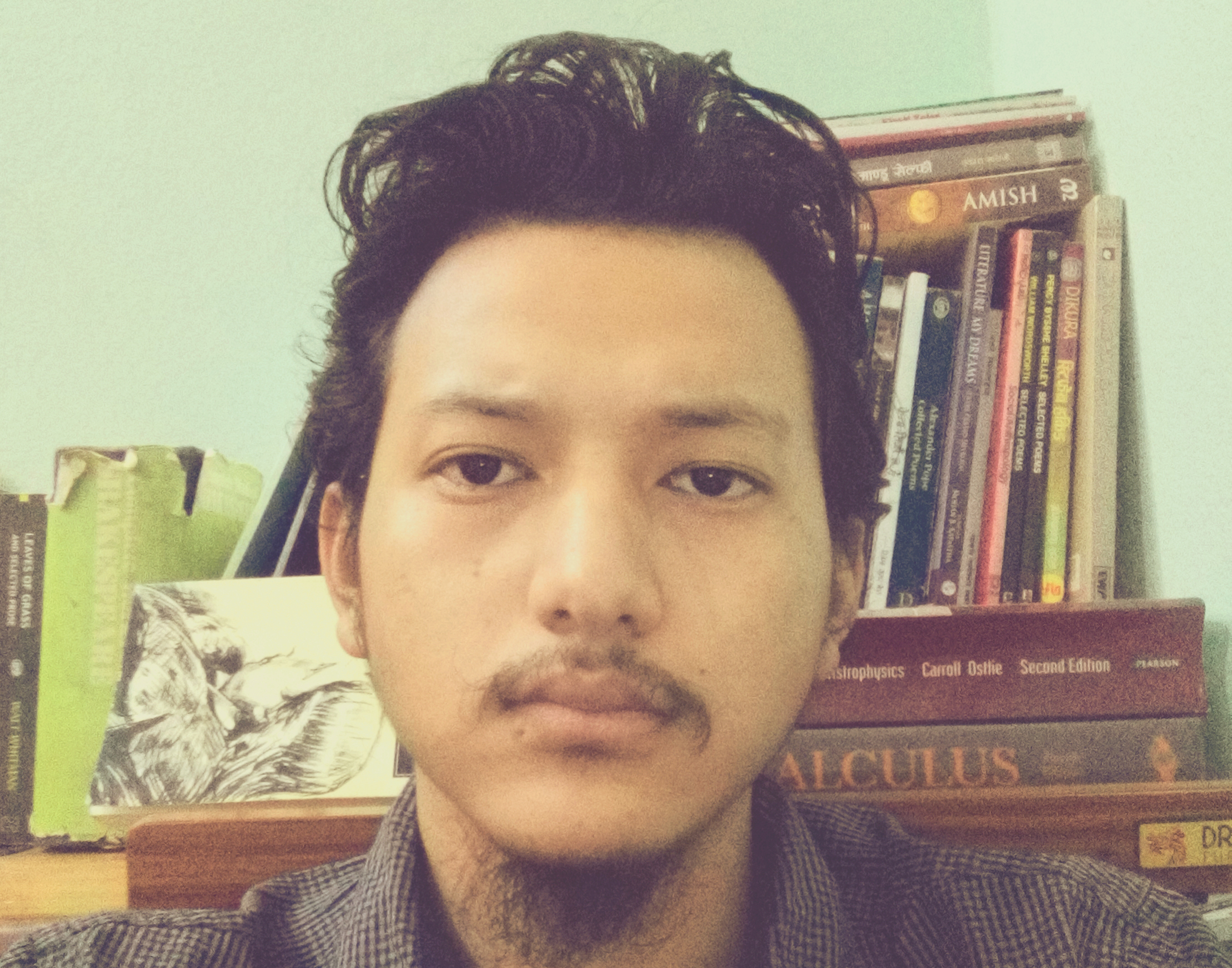 Bhupi Sherchen And The Present 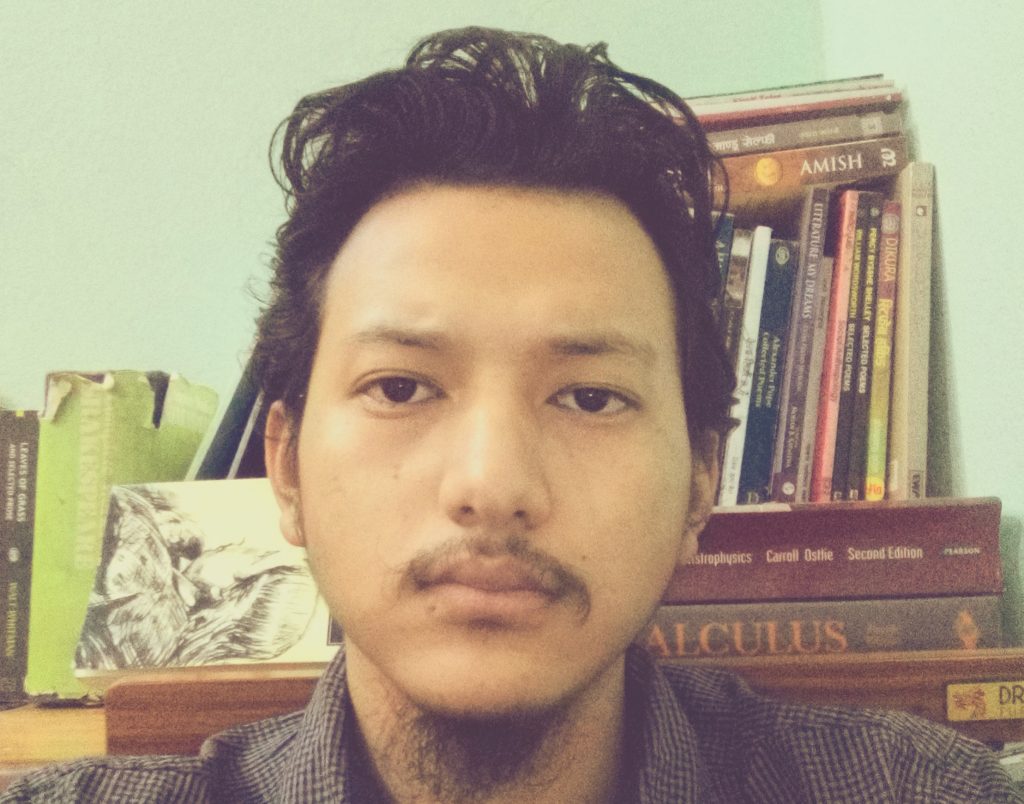 Bhupi Sherchan, One of the modernist poets who lead the Post-Rana literary period, also regarded as the inaugurator of modernism in Nepalese Literature, has the striking lines from poetry collection from 1959-1969 A.D.-“A Blind Man On a Revolving Chair.” It never fails to surprise the reader again and again. The particular book also won Sajha Puraskar 2026 B.S. It represents the essence of myths and gods not through their worship, but by striking out new trend of thought in depicting them. For example in the Poem “Mero Chowk” the notion of thought shifts from God to Men and Men to God as if both are lacking a complete truth. He declares the foolishness of human life resulting in god-self to be sad, where both are dejected and cursing each other. The modern poems like such, set rampage during the 60s. The linguistic distinction along with the rhetorical simplicity is the most powerful tool in Bhupi’s  poem. The modern imagery like “Saguro Gallii” and “Chowk” from the particular poem always dwells among the readers, and its mark can still be distinguished, in most of contemporary poems.

“A blind man on a revolving chair” –published in 1969, brought major changes throughout the articulation of social and political dilemmas. One can still relate the serene act of the poem “Yo Hallai Hallako Desh Ho” to present contemporary social context too. On one hand, it feels as if the nation is satirized. On the flip side, if not satirized, one cannot allocate the trench and ditches of the nation. The poem was believed to be composed between 1967 to 1968. It is certain that the Bhupi’s poetry not only unravels realism but also animates the comic-satire through realism.

The poet in the poem “Yo Hallai Hallako Desh Ho” compares that “poet” themselves are turned into “stones”. He mocks the “leaders” of the nation as the “traders of the soul”. The populace of the nation is visiting the Pashupati and Swayambhu not to receive the sacred food, but as an obligation of the rumors and hearsay of the society. Here sugar factories make booze in name of sugar. It is the depiction of Nepalese thought and how the nation’s political officials misuse the general populace. Bhupi Sherchan portrays the threat and disorder of social rumors, which confronts his own constant unnoticed struggle too. It is also the great slogans and their “chanters” in the street that the poet wants to portray in his poems. The poem tends to be more personal and semantic within the frame of himself and society, which represents the poem to be more aggravating. The poem inclines for more sophisticated and soulless personifications, where dead souls are “judges in musical contests”. Where figures like Devkota and Parijat are ill-treated by his contemporaries. And through similar analogy, if we compared it to the context of the present hour, the whole nation is charged not only through unreliable sources and heresies, but also through the fickle domestic exaggerations. The whole nation is pacing blindly through the rumors and hearsays, likely as post- Rana society in the 60s.

Moreover, his extensive use of symbolism is furrowed sagaciously in the poem. He excavates the national traits and fearlessly expresses it. The symbolism of  “wooden legs” and “forehead” is commonly repeated relating it to the poem “Hami” too. These symbols are coupled symbolizing the social blindness not through the god or religion themselves, but through the constraining higher authority of the 60s. It is comprehensible that the poem tries to arouse a benevolent skepticism among the masses, that has been following the rumors. Now, delving into the present day one cannot ignore the fact that a similar situation pervades the present hour. Even today we somehow lack keen awareness to question the vague and unresolved rumors and authorities.

Cantering towards the conclusion of the poem the poet declares, “if the grounds of this country are dug to its core, all that one can find is nothing but rumors”. But with the genuine inspiration to nation-poets, fellow countryman and leaders of the country, he encourages to sing for country’s awakening, to “wake up and sing the song about the forts of Kangra and Kalapani”. And it is this awakening that keeps us common despite our profound virtue of variegated society.

More relatively, It is unreasonably clear that Bhupi’s poems portray the current days of Nepal, that’s continuously facing the problems of rumors and heresy. It is about time that we should wake up and confront prominently to these distressing situations. The implicit motif of the poem propounds us to confront with logic rather than, to be blindly consumed by rumors. And though it’s obscure to penetrate the symbolic representation, I personally think it’s one of those poems which each Nepalese and poetry lovers should go through.