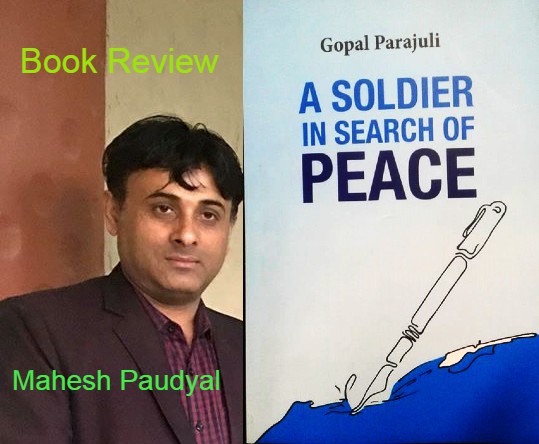 Modernity, Emanuel Kant said, is freedom from self-incurred tutelage. What is most cueing in this theorization of modernity—independent of limiting categories like ‘modernism’ and ‘post-modernism’ which are pure cultural concepts, the catchword ‘self-incurred’ is very intriguing. It entails the idea that freedom of the mind is much more important than freedom from external forces. It also entails that in most of the cases, the lack of freedom springs more from one’s choice than from circumstances. But what compels an individual to become a subject of such self-incursion is worth contemplating. If one gets to the root of those circumstances, very often it becomes easy to unearth those causes.

This question of freedom occurs to my mind when I read the two latest epics of poet Gopal Parajuli in tandem. First,  his work Diary of a Jailbird (2018) and its successor, yet another epic A Soldier in Search of Peace (2020) are bound by one underpinning theme: a serious engagement with the poet’s internal self, which is making an attempt to break open all the limiting walls and fly in the air of freedom. The word ‘Jailbird’ in the first metaphorizes the trepidations inside the poet living in a suffocating present, while the phrase ‘Search for Peace’ in the later epic stretches the theme further and suggests that the ‘Jailbird’ will have its deliverance only if there is peace.  And that search for peace is from a soldier, not from a civilian, and this lends the epic its extraordinary twist and evokes interest. This review centers on this later epic, and tries to unfold the paradox that underscores the dynamics dramatizing the relation between a soldier and peace.

The epic invites readers to peek into the author’s biography. During his youthful days in Kathmandu, poet Parajuli had a lot of fascination for military affairs and martial arts. The blurb of the book says, “A former member of the National Cadet Corps, Poet Parajuli was also trained as a boxer, but he abandoned that vocation and chose to be a poet. While a member of the Corps, he was selected for the post of Second Lieutenant, but he rejected this offer as well.” A boxer abandoning the ring, a potential soldier flinging away his gun and all military prospects to become a poet! This is amazing, thrilling, disturbing and stunning! It is around these shocks this epic has to be inspected.

Under what circumstances a young man becomes fascinated with boxing and army is plainly understandable. It would also be easily understandable if our poet had abandoned all those prospects for a higher, more lucrative and a more rewarding job, because there are ample examples of people deserting barracks, especially during wartimes, to find better resorts. But in case of poet Parajuli, nothing of the sort is visible. More inquiry into his biography says, he chose to be a private teacher, and sometime later, an editor—both were temporary placements with little income. But a single thing he has continued doing all these decades is writing—letting his prolific pen run through a plethora of genres, including poems, plays, stories, epics, editorials, and the like. If one closely scrutinizes all these works, there is an underpinning theme that connects the works—denouncement of violence and search for peace.

The epic is presented as a dialogue between two characters—a poet and a solider—who are two conflicting selves of the same person, the poet. Engaged in a serious spiritual crisis, the self and its alter-ego present themselves as two paradigms in the poet’s life—the soldier’s paradigm and the seer’s paradigm. The soldier’s paradigm that has its bearing in the poet’s youthful days is both violent and contemplative, and is a cleft entity, unable to settle in the gun, and unknown about its future course of action.

The first half of the encounter is that of a crisis that comes about, when the poet is face-to-face with an ‘armed character’, which means, the arguments, zeal and vigor of the armed character is more dominant, while the poet is recessive. The second half is where the poet presents himself as a refuge, and the armed soldier comes into his camp. This means, this time, the soldier is recessive and the poet dominant. Finally, the soldier has abandoned his arms and has dissolved into the personality of the poet. This announces a moral victory of peace over war, of reconciliation over gun, of tranquility over violence and of love over hatred. In no circumstances can the gun justify its presence in the human world. All uses, deployments and exhibitions of guns expose inherent violence rooted deep in the human mind, and can in no way emblematize peace and tranquility. What use is a gun a man picks, if it is not to shoot, deter, intimidate or terrorize? There can be no use of a gun other than these!

This criticism of the use of a gun problematizes many establishments at once including the institution of the army, the idea of the national boundary, the pretext of ‘peace-keeping’, the concepts of safety and security and the entire drama of conflict resolution and transformation. Though a long history of justificatory discourse is in action, perhaps since the founding of the first kingdom in the world justifying the presence of the gun, the army and defense mechanism in the universe, no one can deny the blatant fact that the gun is rooted in the evil mind; the army is rooted in the vicious paradigm of human existence, no matter how lucrative, appealing, glittering, essential and justifying the face-value of the institution of the army appears. The gun and the army are those absurd paradoxes of the human life, which have, over the ages, settled themselves as a fundamental necessity and fact, but their food comes from nowhere but injuries, both mental and physical, and death of the humankind. They are an existential snare, a self-incurred trap, a cobweb, a shame on the face of the humankind. In fact, the gun and the army are the darkest images of the humankind in the mirror of civilization.

A Soldier in Search of Peace is a powerful slap against false justifications the human being has given to violence. The soldier’s shutting of guns and wars and coming to dissolve with the existence of a peace-loving poet is a grand universal message. After all, all humanistic philosophies on earth, in any region and faith for that matter, have advocated only for peace. The spiritual counterpart of the humanistic philosophies do not stop at guns and armies they deride; they move beyond to vanquish even mental vices: greed, desire, avarice, luxury and attachment. Where, then are there rooms for guns and armies? For martial arts? For aggression, conquest, war and violence? For treaties and accords? Nowhere! They are later inventions of the capricious human mind, and half of the world came up to justify the evil under the spell of hegemony. The power centers invented discourses around guns and armies, hegemonized the entire globe, and established a falsity as truth.

Poet Parjuli, in his A Soldier in Search of Peace, has deconstructed this discursive truth that camouflages mirages like the gun and the army. By doing so, he upholds peace as man’s highest ideal, ultimate goal and the final resort. He reminds poets around the globe to assume this responsibility and discharge the same through their pen.

The epic, set in the modern times, makes allusions to some of the latest military exercises, instances of violence, terrorism, armament, nuclear proliferation and the like all over the world. In unzipping the chords of discourses formed around fashionable concepts like gun and army, the epic is postmodernist, but it doesn’t stop there. Unlike postmodern works, it doesn’t merely stop by unearthing the logos that conceal the contradictions around these discourses. Instead, the epic gives a solution; it suggests an alternative; it imagines a different centre of focus. It questions the gun and the institution of the army and replaces it with peace and poetry. In other words, it dispels one centre, namely violence, and replaces it with another, namely peace—the Buddha way. And to do so, the poet invites many others poets of the world, both ancient and modern, and lines them up with him. He invokes the Buddha, the songbirds, the sky, the rivers and the mountains that stand for freedom and peace.

This replacement and this idea of an alternative makes the epic a post-postmodern work.