A Tale of Imitation Boomerang: A review of ‘The Light That Failed’

“The future was better yesterday.”

This is the opening sentence of the book by Krastev and Holmes whose book’s title is styled after 1949 classic ‘The God That Failed’. While ‘The God That Failed’ was a collection of six essays where the authors then focused on their disillusionment with communism, ‘The Light That Failed’ is a work of political history and political psychology that presents a very original and convincing analysis on why the liberal promise of 1989 eventually crumbled.

The year 1989 is a watershed in the history of world politics. The Berlin Wall fell. Indeed, the wall was more than a brick and mortar wall and rather a symbol that divided the ‘liberal west’ and ‘communist east’. Out of the great struggle of ideology, liberalism emerged as a triumphant over communism. The sentiment of that time was aptly captured by Fukuyama in his ‘End of History’. 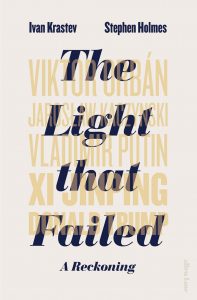 Then what exactly was the reason that the ‘light of liberalism’ failed in the ensuing years? Was it because of the arrogance and complacency of ‘the west’? Was it because the countries ultimately fell back to their ‘aboriginal undemocratic cultures and tradition’?

The book seeks to answer these questions from the angle of psychology –the ‘imperative to copy’ and the concomitant ‘psychological stress’. In the early 90s, the countries in transition imitated (or had to imitate) the western institutions, political process and values. It was an age of copycat westernization, an age of liberal imitation.

If the imitators fail, then it’s their fault for failing to copy aptly. If the imitators succeed, it is the vindication of the model itself. To the imitators, the result is an immense ‘psychological stress’ with a sense of dispossession, loss of identity, and severance of roots. A perfect recipe for a nationalist resurgence!

Krastev and Holmes use this paradigm to analyze the political trends for the last three decades in Russia, Eastern, and Central Europe. After the collapse of communism, they imitated a new inescapable orthodoxy of liberal democracy. The quest to modernize and assimilate was shaped by the imperative to imitate. Thus, this asymmetry between the imitated and their imitators became a painful feature of the East-West divide after 1989

Thus, it is on this tension of imitation that the book delves into.

Also, the book gives a thorough analysis of how the imitator (Russia) ended up using the rule book of the imitated (USA) to retaliate against the latter.

The political imitation backfired to ‘the imitated’ as well. In an interesting turn of fate, the imitated as well have come to feel the sense of victimhood, the sense of dispossession. The mimics are stealing away their jobs, their values, their income, their privilege—such perception in the west today is the driving motor of populist tide targeted against the outsiders, the migrants, and the copycats.

Moreover, the book includes observations on China as well. The authors claim that China copied the technology and economic structures from the West but avoided political system and maintained cultural insulation. In a way, the Chinese experience signifies the end of the ‘Age of Imitation’. Similarly, China aims to be an influencer that can pull the shots rather than a model or beacon.

The Light That Failed, therefore, is an original work of intellectual excellence that aptly answers why the West’s missionary quest to cast the rest in its own image failed eventually. It’s a separate question whether that ‘image of the west’ exists anymore.

Of the future, the authors claim that ideological diversity, not homogeneity will be the defining feature.

The Light That Failed: A Reckoning